THE POLITICAL CORRUPTION EVIDENCE | THE ELON MUSK REPORTS -- (Click HERE, on this title, to open the Gallery) | Many Covered Up Tesla Deaths ELON MUSK IS A CROOK AND SCAMMER

Many Covered Up Tesla Deaths

San Franciso-based law firm points to Autopilot as cause of death. As the investigation into the death of a Model X owner continues, Tesla is taking a familiar stance when it comes to where the fault lies in the collision with a concrete median: the driver.

Walter Huang died in a crash and vehicle fire in a Model X near Mountain View, California, last month. The family hired law firm Minami Tamaki LLP to explore legal options, and the firms said it believes the Autopilot feature in the electric carmaker’s vehicle probably caused his death.

Tesla notes that according to its readings from the vehicle, Huang did not follow the procedure for using Autopilot. The company said he went longer than six seconds before touching the steering wheel. The system requires drivers to touch the wheel every five seconds.

The crash and subsequent fire spurred the investigations by the National Highway Traffic Safety Administration and National Transportation Safety Board (NTSB). The NTSB also revealed it was investigating two earlier fires involving Teslas.

(Waiting to take delivery of a Tesla Model 3? You might be caught in a “time shift.” Click Here for the story.) 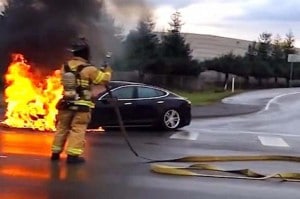 Other Tesla vehicles have caught fire either as part of a collision or some other stress on the battery compartment.

The query comes on the heels of an accident were one of Google’s self-driving test vehicles struck and killed a pedestrian on a four-lane divided highway without slowing down or attempting to maneuver around Elaine Herzberg, who was crossing the street with her bicycle.

Minami Tamaki said its preliminary review suggested the autopilot feature was defective. It also noted it found complaints about the system from other Tesla owners involving navigational errors.

“(Our) preliminary review indicates that the navigation system of the Tesla may have misread the lane lines on the roadway, failed to detect the concrete median, failed to brake the car and drove the car into the median,” Minami said.

(Click Here for details about Tesla being hit with NLRB complaints over firings.)

Tesla blames Huang, saying he knew that Autopilot was not perfect and he had told them it was not reliable in that exact location, but used Autopilot in that spot anyway. Tesla said the system always reminds drivers to be alert and have hands on the wheel. It also warned Huang several times on the day of the crash to do so.

“The crash happened on a clear day with several hundred feet of visibility ahead, which means that the only way for this accident to have occurred is if Mr. Huang was not paying attention to the road, despite the car providing multiple warnings to do so,” a Tesla spokesperson told Reuters.

The NTSB confirmed on Wednesday that it has two other pending investigations of other Tesla crashes, including a probe of an August 2017 Tesla battery fire in Lake Forest, California, that occurred after an owner lost control and ran into his garage. That fire probe had not previously been reported.

(Tesla could find itself in crosshairs if Trump trade dispute with China escalates. Click Here to learn why.)

“We’re really more looking at the fire aspects,” NTSB Chairman Robert Sumwalt told Reuters, saying that the battery continued to ignite even after it was loaded onto a truck.Tesla declined to comment on the August incident.

This entry was posted on Thursday, April 12th, 2018 at and is filed under Automakers, Automobiles, EVs, Markets, SUVs, Safety, Safety, Semi-autonomous Driving, Technology, Tesla, Traffic Fatalities, U.S./North America. You can