THE POLITICAL CORRUPTION EVIDENCE | THE ELON MUSK REPORTS -- (Click HERE, on this title, to open the Gallery) | John McCain Bought And Paid For By Elon Musk ELON MUSK IS A LIAR SCAMMER POLITICAL BRIBERY CROOK

John McCain Bought And Paid For By Elon Musk

John McCain Bought And Paid For By Elon Musk 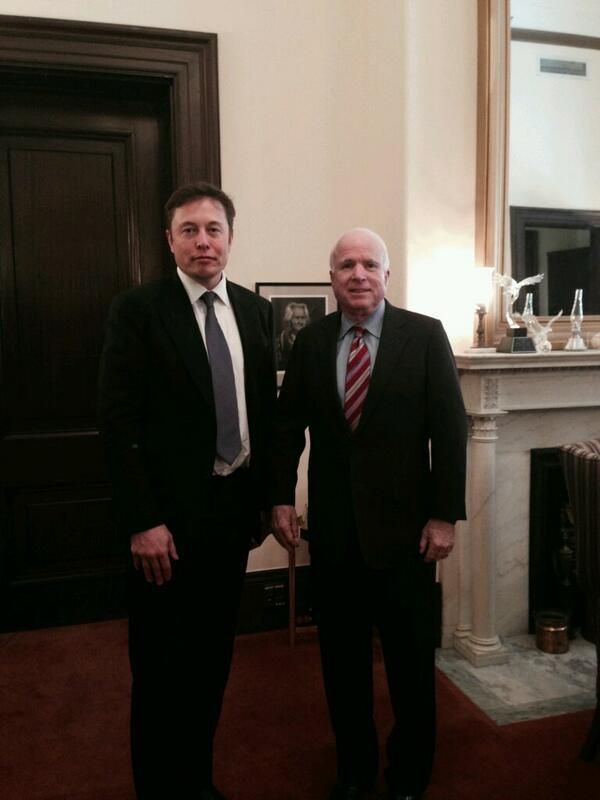 Sen. John McCain (R-AZ) and businessman Elon Musk, creator of SpaceX, Tesla Motors, and SolarCity, have enjoyed a long and close business and political relationship that have helped support the senator while enriching Musk at taxpayer expense. Musk and his companies have support McCain and his McCain Institute while the senator has consistently supported and advanced the legislative interests of Musk’s companies in the Senate.

Despite being bolstered by the benefit of about $4.9 billion in government funding, Musk’s companies have recently lost more than $3.5 billion in value. This loss in stock value was calculated at about half the value of Musk’s ownership in three companies. Despite the growing financial challenges the companies face, Sen. McCain has remained firmly in support of Musk and his business ventures.

SpaceX had a spectacular failure when it’s unmanned CRS-7 rocket exploded last year, and earlier this year had its third failure when it failed to land its Falcon 9 rocket on a drone ship in the sea. While a competing provider of launch rockets has had a stellar record of success, Sen. McCain has instead pushed for SpaceX to receive government contracts for rocket launches. Even after those failures, McCain stood firmly with SpaceX. While other members of Congress expressed doubts, and raised questions about SpaceX, McCain remained firm in his support of Musk’s space company.

McCain has consistently supported SpaceX and done everything he could, it seems, to help the company win government space launch contracts. The federal government had granted space launch contracts to United Launch Alliance (ULA), a join venture of Lockheed Martin and Boeing. McCain accused ULA of “cronyism” for having won those contracts in the past while consistently supporting the government awarding space contracts to the company owned by his crony Elon Musk – SpaceX....more: https://www.redstate.com/diary/qstarweb/2016/04/20/john-mccain-bought-paid-elon-musk/


Who's that next to Musk? LOL