THE POLITICAL CORRUPTION EVIDENCE | THE CORRUPT SENATORS -- (Click HERE, on this title, to open the Gallery) | 590 MSNBC Does Not Merely Permit Fabrications Against Democratic Party Critics. It Encourages and Rewards Them.

590 MSNBC Does Not Merely Permit Fabrications Against Democratic Party Critics. It Encourages and Rewards Them.
590

MSNBC Does Not Merely Permit Fabrications Against Democratic Party Critics. It Encourages and Rewards Them. 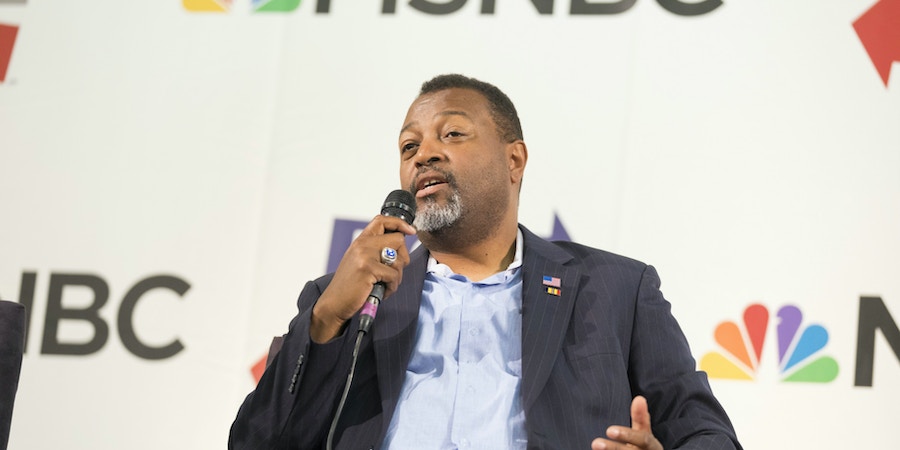 DURING THE 2016 primary and general election campaigns, various MSNBC hosts were openly campaigning for Hillary Clinton. One of the network’s programs featured Malcolm Nance (pictured above), whose background is quite sketchy but is presented by the cable network (and now by NBC News) as an “intelligence expert” and former intelligence officer for the U.S. Navy.

On August 20, 2016, weekend host Joy Reid asked Nance about the supposed “affinity” for Russia harbored by Jill Stein supporters. In response, Nance told MSNBC viewers: “Jill Stein has a show on Russia Today.” You can still watch the video of this claim here on MSNBC’s own website or see it here:

Whatever your views might be about Stein and her third-party candidacy, there is no disputing the fact that Nance’s statement was a falsehood, a fabrication, a lie. Stein did not have a show on RT, nor did she ever host a show on RT. What Nance said was made up out of whole cloth — fabricated — in order to encourage MSNBC viewers to believe that Stein, one of the candidates running against Clinton, was a paid agent of the Kremlin and employee of RT.

Reid allowed Nance’s lie to stand. Perhaps she did not realize at the time that it was a lie. But subsequently, a campaign was launched to urge MSNBC to correct the lie it broadcast, based on the assumption that MSNBC — which is part of NBC News — was a normal news outlet that functions in accordance with basic journalistic principles and would, of course, correct a false statement once that was brought to its attention.

The media watchdog group FAIR repeatedly documented the lie told by Nance and urged MSNBC to issue a correction. The Intercept wrote about this falsehood on several occasions and also noted that MSNBC was refusing to issue a correction of what everyone knows is a false — but an obviously quite significant — claim. Multiple tweets were directed at NBC News, MSNBC, Nance, and Reid asking them to correct the fabrication to their viewers: To date — almost two years later — neither NBC News nor MSNBC, nor a single journalist who works for either one of those media outlets has corrected this significant falsehood, despite obviously knowing that it was broadcast to their viewers. In other words, NBC News and MSNBC know that they told viewers something that was materially false, and yet refuse to correct it. Please, defenders of this network: Tell me what that says about its integrity, about its real function, about whether it is a real news outlet.

Worse, not only was Nance never sanctioned in any way for the lie he told, but he was rewarded: He has since gone from “MSNBC contributor” to “MSNBC intelligence analyst,” and is far more pervasive on the network, and its hosts have spent the month aggressively promoting his new book on how Vladimir Putin is destroying U.S. democracy.

On MSNBC, lies are not corrected; they are rewarded, provided the lies are designed to smear the reputations of Democratic Party critics. Is this not definitive and conclusive proof of that: that this is not a news outlet but a political arm of the Democratic Party? What else could possibly explain, let alone justify, behavior like this? I’m asking that earnestly.

I BRING THIS UP again now not because I think MSNBC will ever correct its lie — it has made clear that lies designed to destroy the reputations of Democratic Party critics are perfectly permissible — but because a very similar event happened on Friday night involving the same MSNBC analyst.

This week, I traveled to Moscow to meet with Edward Snowden, as well as to participate in a cybersecurity conference, on a panel regarding “fake news” that included Alexei Venediktov, famous in Russia as a fierce critic of the Putin government in his position as editor-in-chief of Ekcho Moskvy radio station, along with Giovanni Zagni, head of an Italian website dedicated to checking politicians’ statements who is working with Facebook to determine “fake news.” (The Intercept paid for my travel and I was paid no fee for the trip).

The panel was moderated by RT Editor-in-Chief Margarita Simonyan and also included Sergey Nalobin, acting deputy director of the Information and Press Department of the Russian Ministry of Foreign Affairs. Given the presence of harsh Putin critics on the panel, the discussion included severe criticisms of both the U.S. and Russian governments, their propensity to lie, and their desire to control the internet.

After Nalobin claimed that Russia was the victim of disinformation and “fake news” campaigns, I responded by pointing out that while this was true, Russia is also the perpetrator of such campaigns, and that in general, the history of the Cold War has continued through today: whereby the U.S. and Russia both use the same tactics against one another while claiming to be the victim:

After the event, there were camera crews from numerous media outlets wanting to interview some of the panel participants. I spoke to all of them. One of them was RT, which published the full transcript of the three-minute interview, as well as selected video clips. The primary point I made that received the most attention — namely, that it has become regarded as suspicious, and even treasonous, merely to visit Russia, and that I accepted the invitation to attend in part to combat that toxic, dangerous, and xenophobic perception — is the statement of mine that RT highlighted on social media.

Obviously, anyone is free to criticize people who decide to visit Russia. Anyone is free to denounce those who speak with RT (such as Stephen Hawking, whose RT interview can be seen here, though I’d love to hear from those holding such views why it’s permissible to speak to think tanks such as Brookings and Center for American Progress, which are funded by Gulf state tyrannies). And, needless to say, anyone is free to attack or dispute any statements or views that I, or anyone else, express as part of such discussions.

Nance did none of that. What he did, instead, is exactly what he did on MSNBC to Jill Stein in August 2016: In two tweets, he outright lied about me on purpose, telling his 420,000 Twitter followers that I am “an agent of Moscow” and “deep in the Kremlin pocket.” He further lied by stating that I “helped Snowden defect” and that I “reports into [my] masters in Moscow.”

None of Nance’s statements here is opinion. These claims — especially that I am an “agent of Moscow” and “deep in the Kremlin pocket” — are intended to be factual statements: that I work for, and am paid by, Russia and the Kremlin, and that I aided Snowden in “defecting” to Moscow. They are all outright lies. There is no other way to describe them.

Thus far, his tweet has been retweeted by close to 5,000 people. After I noted that they were lies, Nance reaffirmed them and said how proud he was to have broadcast them.

This is because Nance knows that he is free to lie this way with impunity. That’s because he works for an organization — MSNBC — that masquerades as a news outlet but actively encourages its employees to lie this way about anyone who criticizes the Democratic Party.

He will be celebrated inside MSNBC, not sanctioned or even told to rescind his lie, because — just as happened with the lie he told about Jill Stein — the person he chose to falsely accuse of being a paid agent of Russia is someone that the MSNBC audience of Democratic partisans hates, and lying is thus permitted and encouraged, just the way it is in any partisan organization. The network is derided as “MSDNC” for a reason.

Obviously, Nance is simply adhering to the post-World War II tactic of the U.S. military and intelligence community from which he emerged: For decades, they accuse any journalists they dislike, or dissidents of any kind, of being covert agents of Moscow.

You would think that any real journalists inside NBC News might be bothered enough by this classically McCarthyite tactic — accusing a journalist of being an agent of Russia without a shred of evidence — to denounce it, but you would be quite wrong. Just look at how identical the script is used by Nance to the actual words Joseph McCarthy spoke at one of his notorious hearings: 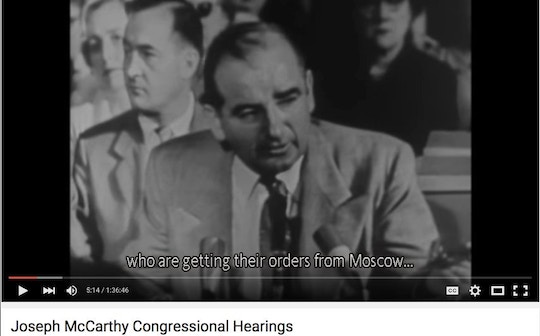 That’s because NBC News and MSNBC have essentially merged with the CIA and intelligence community and thus, use their tactics. The network is filled with former generals and CIA officials who are part of the community that pioneered these smear tactics of accusing journalists and critics they dislike of being traitors, spies, and Kremlin loyalists. Indeed, Nance sometimes appears on MSNBC along with former CIA Director John Brennan, who MSNBC also hired as an “analyst.” This is who they are.

It’s also what the Democratic Party is: This is their go-to tactic. After my colleague Lee Fang reported on the numerous corporate interests for which Howard Dean secretly shills in exchange for large payments — everything from pharmaceutical companies to Iranian regime-change cults such as MEK — this was the response from Dean (who, needless to say, also frequently appears on MSNBC): 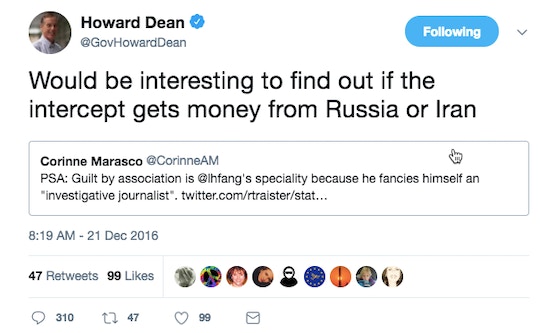 Anyone who criticizes the Democratic Party or its leaders is instantly accused of being a Kremlin agent despite the lack of any evidence. And the organization that leads that smear campaign is the one that calls itself a news outlet (and this is all independent of the fact that another one of its hosts recently lied about having her blog hacked and claimed she reported it to the FBI — a claim everyone in journalism knows is a lie — and not only was never sanctioned for it by was praised for doing thatby MSNBC’s star host).

Needless to say, MSNBC is not the only cable outlet that acts as an arm of a political party and encourages its on-air personalities to lie and smear critics of that party. I have spent years documenting lies told by certain Fox News employees and denounced the willingness of some of their hosts to do exactly that while on Fox News itself.

But you can’t be a credible critic of lies — whether told by other cable outlets or politicians — if you not only permit but clearly encourage and reward your own on-air personalities when they do the same. And in the case of MSNBC, they not only do this, but they practice one of the most historically destructive versions of it: fabricated allegations that their critics, including journalists, are treasonous agents of a foreign power.