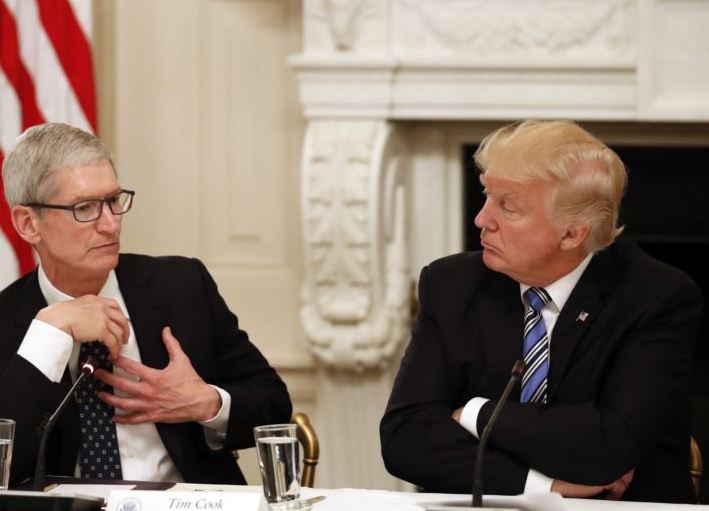 Just hours after the white-supremacist blog the Daily Stormer was booted off GoDaddy Inc.’s domain-name registrar, Google Inc. followed up in a similar fashion, canceling its new registration for violating its terms of service. The decision meant that the Daily Stormer was once again searching for a new home after it posted a blog that was interpreted by technology companies as inciting violence, following the weekend events in Charlottesville, Virginia (pictured). The publication caused outrage following the car attack in Charlottesville during a white supremacist rally that left one person dead and 19 injured.

The storm over the Daily Storm was just the first of many subsequent actions by tech companies, in particular, to hit back against hate groups that were supported in part by their services. Since then, dozens of companies providing a range of online services to these groups have pulled back support.

On Thursday, the chief executive Apple Inc., the world’s most valuable company, joined in. Tim Cook said in an email to employees that he disagreed with Trump’s tepid criticism of white supremacy groups. “I disagree with the president and others who believe that there is a moral equivalence between white supremacists and Nazis, and those who oppose them by standing up for human rights,” he wrote. “Equating the two runs counter to our ideals as Americans.”

Cook said he would donate $1 million each to the Southern Poverty Law Center and the Anti-Defamation League. He also outlined plans to double donations to human rights groups by Apple employees until Sept. 30. Apple also is setting up a way in its iTunes media service to allow users to support the SPLC.

Cook’s high-profile moves followed a rising tide of tech and other companies distancing themselves from Trump and the hate groups. On Wednesday, Facebook deleted posts that linked to a Daily Stormer article that attacked Heyer. “There is no place for hate in our community,” Facebook CEO Mark Zuckerberg said. “That’s why we’ve always taken down any post that promotes or celebrates hate crimes or acts of terrorism — including what happened in Charlottesville.”

On Wednesday, Spotify weighed in, saying it’s removing “hate music” from its streaming service. PayPal and Apple Pay also stopped payment support for websites selling white nationalist and Nazi apparel. Even CloudFlare Inc., the content delivery network that had continued to support the Daily Stormer, pulled out after a reader said its support indicated it was “one of us.” CloudFlare CEO Matthew Prince pithily explained: “My rationale for making this decision was simple: the people behind the Daily Stormer are assholes and I’d had enough.”

What appeared to galvanize all these companies into action early this week was that just hours after the attack, the Daily Stormer published a blog post mocking the deceased victim using obscene and sexist language. Heather Heyer died after a car rammed into a crowd of anti-white supremacist protesters who had gathered to oppose the rally. James Alex Fields, the driver, was arrested shortly afterward.

Just hours after the Daily Stormer published its post, its web hosting provider GoDaddy announced that it would not tolerate this kind of hate speech, and gave the site 24 hours to find a new host. The Daily Stormer went offline, blaming the Anonymous group for hacking its site, only to return hours later after registering its domain with Google, Reuters reported.

However, Google quickly decided that it too would not tolerate the Neo-Nazi blog’s presence on its servers. “We are canceling Daily Stormer’s registration with Google Domains for violating our terms of service,” a spokesman for the company told The Washington Post on Monday.

The Daily Stormer had registered its domain with Google at 7:51 a.m. Pacific Time, only for Google to cancel its registration at 11:02 a.m., Business Insider reported. Google later terminated the Daily Stormer’s YouTube channel with immediate effect.

The Internet and social media sites have played host to all manner of extremists looking to incite action and recruit new members. Despite some action against terrorist groups such as Isis and al-Qaida, though, hate groups inside countries have continued relatively unabated online, until now. Indeed, following Google’s move, a number of other technology firms stepped forward to say they would also be parting ways with the Daily Stormer. Zoho Corp., which provides email services and other tools to enterprises, said on Twitter it too was dropping the site.

Zoho was later joined by Discord Inc., which makes a chat application for video gamers. Discord said it was shutting down the altright.com server and would ban the accounts of users who were associated with the events in Charlottesville.

The furor comes amid what could be a much wider crackdown on extremism and terrorism by Internet companies and other big businesses. In the hours after the Charlottesville attacks, the hospitality website Airbnb Inc. said it was banning white supremacists from using its services. It also revealed it had shut down the accounts of some individuals even prior to those events.

It’s not clear what the Daily Stormer’s next move will be. The site will likely be looking for a new host for its domain, but finding one that’s agreeable to its content could be a tough ask. The Internet Corporation for Assigned Names and Numbers, a nonprofit organization known as ICANN that oversees domain registrations, lists almost 3,000 web host providers. But many will likely shy away from hosting such a controversial site. Then again, a smaller provider might yet give the Daily Stormer a chance in order to gain publicity.

Still, the events in Charlottesville, coupled with Trump’s failure to use his office to tamp down white supremacists, appear to have knocked more businesses off the fence, suggesting they may be taking more overt action against extremists.

With reporting from Robert Hof