AAH-HA!So The Feds Really Do Have Mind And Body Control Beams! 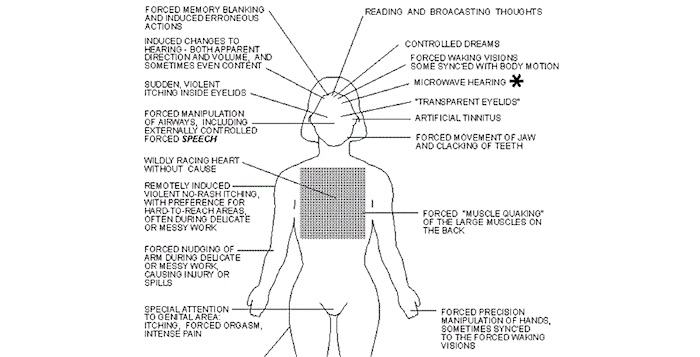 When journalist Curtis Waltman filed a Freedom of Information Act request with Washington State Fusion Center (which is partnered with Department of Homeland Security) to obtain information about Antifa and white supremacist groups, he got more than the information he was looking for – he also accidentally received a mysterious file on "psycho-electric weapons" with the label “EM effects on human body.zip.” The file included methods of "remote mind control."

Via the Daily Beast:

According to Muckrock, a nonprofit that publishes government information gathered through FOIA requests, the mind-control documents came from the Department of Homeland Security-linked agency in the form of a file called “EM effects on human body.zip.” The file reportedly contained various diagrams detailing the horrors of “psycho-electronic weapon effects.”

One diagram lists the various forms of torment supposedly made possible by using remote mind-control methods, from “forced memory blanking” and “sudden violent itching inside eyelids” to “wild flailing” followed by “rigor mortis” and a remotely induced “forced orgasm.” It was not immediately clear how the documents wound up in the agency’s response to a standard FOIA request, but there was reportedly no indication the “remote mind control” files stemmed from any government program.

And according to Popular Mechanics:

The federal government has absolutely experimented with mind control in a variety of methods, but the documents here do not appear to be official.

Waltman had no idea why these documents were included in his request and isn't sure why the government is holding them. The WSFC did not respond to requests for more information.

As fun as conspiracy theories are, Muckrock doesn't believe the images are "government material."

One seems to come from a person named “Supratik Saha,” who is identified as a software engineer, the brain mapping slide has no sourcing, and the image of the body being assaulted by psychotronic weapons is sourced from raven1.net, who apparently didn’t renew their domain.

Muckrock put out a call to WSFC but hasn't yet heard back from them.

For more details, go to Muckrock.

It’s strongly reminiscent of what Jon Ronson covered in “The Men Who Stare at Goats” (rather different from the Clooney film it inspired).

The Men Who Stare at Goats

The Men Who Stare at Goats (2004) is a non-fiction work by Jon Ronson concerning the U.S. Army's exploration of New Age concepts and the potential military applications of the paranormal. The title refers to attempts to kill goats by staring at them and stopping their hearts. The book is companion to a three-part TV series broadcast in Britain on Channel 4—Crazy Rulers of the World (2004)—the first episode of which is also entitled "The Men Who Stare at Goats". The same title was used a third tim...

But the diagrams make me think of the work of John Qunicy St. Clair – who is not affiliated with the government, despite his filings with the US Patent Office.
https://zapatopi.net/blog/?post=200604284330.st_clair_hyperinventor 30

Well, being as the “benevolent” govt ran grossly unethical syphilis experiments/studies on its own citizens, wiped entire islands off the face of the globe with nuclear blasts, deliberately exposed its own soldiers to radiation effects, spies on its citizenry wholesale (see for example Snowden and other consequent revelations that are not disputed), routinely runs psy-ops against (once again) its own citizens, and obviously thinks The People serve the bureaucrats, you’ll forgive me if I forgo yukking it up with the rest of the flippant morons.

I’m saying this isn’t an accidental leak of classified material. This is an intentional leak of material that’s been floating around the internet for many years.

We have reasons to believe they did not use the particular techniques described: notably, some of those techniques are patented, and while the patent process makes no attempt to test if applications are remotely feasible and patents largely aren’t effectively tested for novelty in claims during the application process, a patent whose claims overlap with classified research would absolutely be rejected and censored. (We know, from the non-destroyed declassified portions of the MKULTRA documentation, that similar ideas were considered interesting enough to research, of course.)

Had these documents been genuine classified leaks, we would have seen some attempt at censorship in 2008, when other leaks were being tracked down aggressively and before the Snowden leaks changed the PR around material of this type.

http://www.bbc.co.uk/news/science ... Researchers have harnessed the power of thought to guide a remote-control ... It is not the "mind-reading" of ...

Mind-reading device invented by scientists to eavesdrop on ...

Scientists at the University of California were able to pick up several words that subjects thoughtusing a new mind-reading ... In Science News . ... The remote ...

'Mind-reading machine' can convert thoughts into speech ... In Science News . ... The remoteeconomy of the Svalbard archipelago .

http://www.bbc.com/news/science-environment-29974833. Read more about ... Developments include a thought powered remote control helicopter and paralysed humans have ...

Science; Experiment allows scientists to 'read ... We are not at the point of being able to put people in a scanner and read their thoughts. ... Independent News ...

Evidence of ancient communities found in remote parts of ...

The brain scan that can read people's intentions | Science ...

The brain scan that can read ... people's minds and eavesdrop on their thoughts, and raises serious ethical issues over how brain-reading technology ...

Breaking science and technology news from around the world. Exclusive stories and expert analysis on space, technology, health, physics, life and Earth

Scientific American is the essential guide to the most awe-inspiring advances in science and technology, explaining how they change our understanding of the world and shape our lives.

Science News online features daily news, blogs, feature stories, reviews and more in all disciplines of science, as well as Science News magazine archives back to 1924.

Controlling genes with your thoughts -- ScienceDaily

Scientists have developed a novel gene regulation method that enables thought-specific brainwaves to ... read more. Computation ... Get the latest science news with ...

The research paves the way for brain implants that would translate the thoughts ... "This is exciting in terms of the basic science ... The prospect of reading ...

News; Science; This new mind-reading machine translates your thoughts as ... Scientists have developed a machine which can read your mind and translate thoughts to text.