Facebook is on track to post its longest losing streak ever, and some say there's more pain ahead

The social media giant's stock fell nearly 5 percent on Monday, hitting its lowest level since February 2017, as the social media company came under fire after a damaging report about its top management in The New York Times.

Facebook is poised to close its third straight month in the red, which would mark its longest monthly losing streak on record. Furthermore, Facebook is on track for its longest quarterly losing streak since 2013, and its first full year of losses since going public. According to some experts, the stock isn't done falling.

"Technically, when I look at this, there's no question that we've violated the long-term uptrend support line off of the [2014] lows. We've got some support that's going to come in right around $130, but better support coming in at $114," Craig Johnson, chief market technician at Piper Jaffray, said Friday on CNBC's "Trading Nation," adding that he would stay on the sidelines here, rather than putting fresh money to work, or "further reduce positions on it at this point." 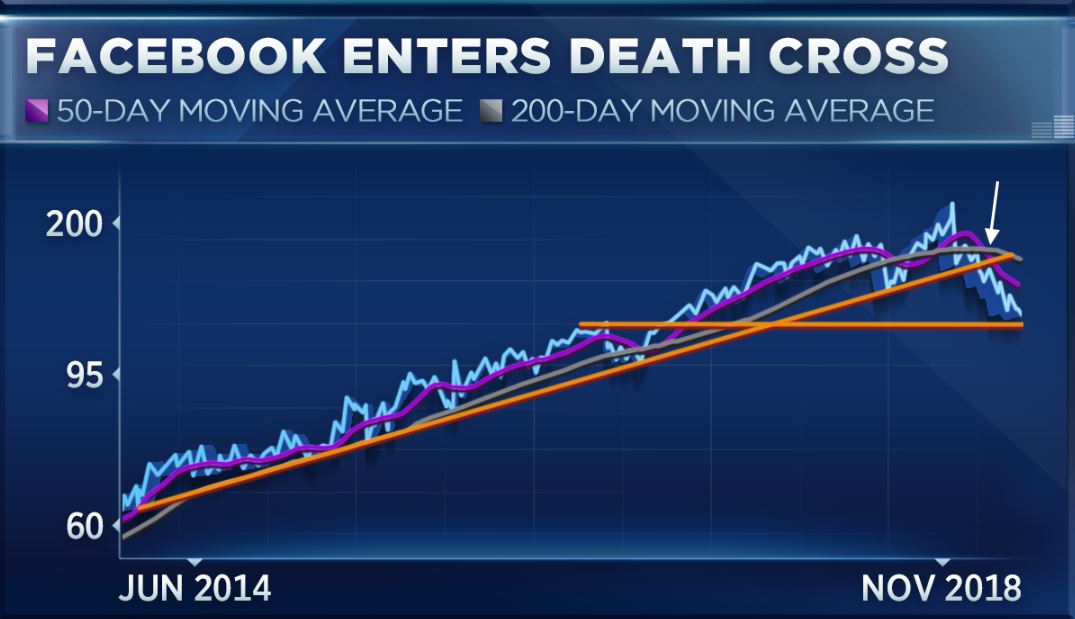 The shares are on track for their third straight month of losses, something they've never done before, and their second straight calendar quarter of losses, which they haven't seen since 2013.

Others are negative on the stock in the near term, but say it could be a value play in the long run since its valuation has fallen so severely. Mark Tepper, CEO of Strategic Wealth Partners, told "Trading Nation" that he finds its price-earnings to growth ratio, or PEG ratio — a measure of a stock's value by taking its price-earnings ratio and factoring in its earnings growth rate — reasonable at this juncture.

Facebook shares are getting crushed — Here’s what three experts say investors should know   4 Hours Ago | 05:08

"If you have a two- to five-year time horizon, Facebook actually looks really attractive at these levels," Tepper said.

Still, the short term will likely be difficult for the stock with mounting headwinds.

"The market has been absolutely punishing companies with decelerating growth, and that's exactly what you're seeing with Facebook. I don't think there's any light at the end of the tunnel anytime soon. They're making some pretty aggressive investments to deal with improving their ad transparency, getting rid of fake accounts, eliminating fake news, and that's going to be a drag on profits in the near term," he said.